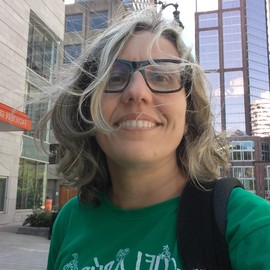 She is a member of the Environmental Epidemiology Research Group of EBOH, of the Quantitative Life Sciences Program (QLS), and Associate Member of the Department of Mathematics and Statistics. Her main areas of research are on the modelling of spatial and spatio-temporal processes under the Bayesian framework.

She was the chair of the local organizing committee of the 2022 ISBA World Meeting, which was held in Montreal, QC, Canada.

I joined the Department of Epidemiology, Biostatistics & Occupational Health at McGill University, Montreal, in August 2016. I am Professor of Biostatistics, and currently, hold the endowed University Chair.

Contact me if you are interested to do a Ph.D. or M.Sc. in Biostatistics developing statistical methods for spatial and spatio-temporal processes.

I am a teaching instructor for the following courses at the Department of Epidemiology, Biostatistics and Occupational Health at McGill University:

I was born in Nova Friburgo, in the state of Rio de Janeiro, Brazil. I’m the result of a mixture between a German father and a Brazilian mother. From 1977 until 1987 I studied at Colegio Anchieta. In 1988 I moved from Nova Friburgo to Rio de Janeiro (also known as the Wonderful City) to get ready to start my undergrad studies. I lived in Rio until 1997.

I lived in England from September 1997 until July 2001 to do my PhD under the supervision of Anthony O’Hagan. There, I lived in Nottingham for one year, then I moved to Sheffield. Soon after finishing my PhD I moved to Connecticut in the USA, where I did a Post-Doc with Alan E. Gelfand.